This limited series is based on the A110 GT and features Jean Rédélé’s much-loved color, Montebello Grey, combined with a glossy black roof. The A110 GT J. Rédélé further differentiates itself with black 18-inch Grand Prix wheels and silver brake calipers. The black leather interior and elegant gray stitching further emphasize the symbiosis between the Montebello Gray exterior and dark styling elements. The A110 GT J. Rédélé has the same 300 hp petrol engine as the A110 GT. 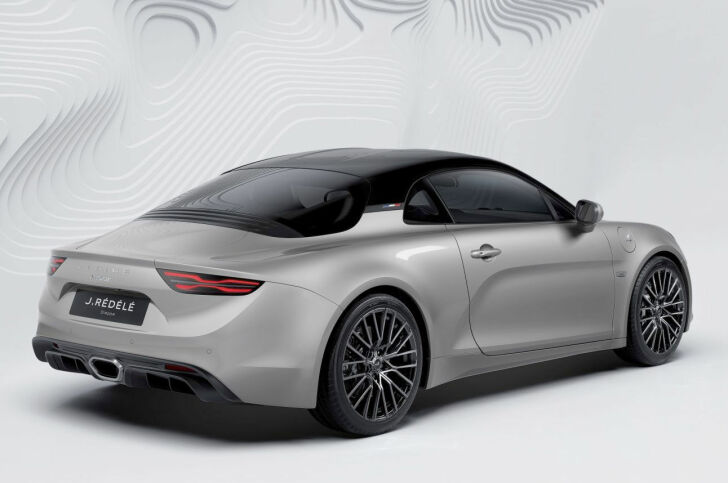 As a reference to the 100th anniversary of Alpine’s founder, the A110 GT J. Rédélé will be limited to 100 units. A plaque bearing Jean Rédélé’s signature and numbered from 1 to 100 is placed on each car. You can order this special version from June 1 through the Alpine app.

Last Saturday a procession of Alpine models from the past and present departed from Manufacture Alpine Dieppe Jean Rédélé, which is traditionally Alpine’s production site. The march ended on the Channel beach, where Dieppe was. Alpine’s Formula 1 race car leads along with the A110 GT J. Rédélé. Among the many classic and new Alpine models, there is also the iconic A110 Berlinette from the Gendarmerie. After the auto show hit the beach, Alpine founder’s now 92-year-old wife, Michelle Rédélé, handed over the keys to the #1/100 A110 GT J. Rédélé. Saturday nights are dinners with prestigious guests, including people who have contributed to the history of the brand, both past and present.

On Sunday, fans and attendees can cheer on BWT Alpine F1 drivers Fernando Alonso and Esteban Ocon for the Monaco Grand Prix, broadcast live on big screens in the city. In addition, fans can (re)discover historical cars that have contributed to Alpine history. Thanks to the efforts of Alpine and the collective IDÉA (Initiative Dieppe vénements Alpine), nearly 1,000 Alpine models of all generations are present at Dieppe this weekend. There are also many figures, who contributed to the brand’s special history, in honor of Jean Rédélé.

Founded in 1955 by Jean Rédélé, Alpine has built a strong reputation over the years for its French sports cars. In 2018, the brand will present the new A110, a sports car that remains true to Alpine’s timeless principles of compact dimensions, lightness, agility and driving pleasure. In 2021, Alpine Cars, Renault Sport Cars and Renault Sport Racing will unite under the Alpine banner, which will become the Groupe Renault brand of innovative, authentic and exclusive sports cars. This sports car draws on the heritage and know-how of the historic factory at Dieppe and the technical know-how of the Formula 1 and Renault Sport Cars teams.