You could call it a reverse career, but David Vogel (42) certainly doesn’t see it that way. He changed course and that has taken him to seventeen different countries in recent months, including for aid transportation to Ukraine.

This article previously appeared in the 5-2022 issue of Truckstar.

David drives on zero hour contracts for Maat Transport and Jan Kees Boer Transport, among others. After the outbreak of war, the last company also regularly provided trucks to transport relief supplies. The world made a good impression on David and from now on he drives relief goods for several months of the year along with various Dutch carriers volunteering for the Christian Refugee Relief (CRR) foundation, which supplies many foundations with relief goods, among others something. “There are about sixty organizations focused on refugee work in Greece,” says David. “I encourage, among other things, for the CRR foundation with relief goods to Thessaloniki and Athens under the guidance of two experienced experts, Rien de Jong and Willem de Koning.” 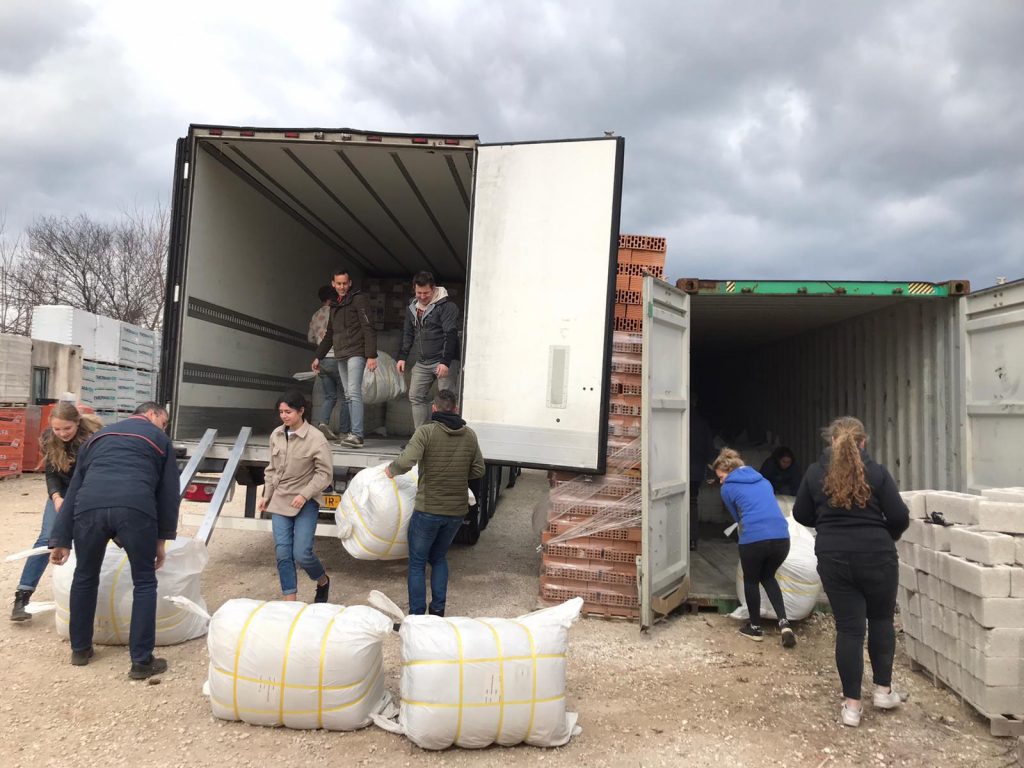 In the last week of February, another aid delivery for refugees in Greece by the CRR foundation is under program. A scenic journey, with adventurous boat crossings from Brindisi in Italy to Igounamitsa in Greece. However, reverse parking on board the boat under surveillance is so tight that it can only be done with the rearview mirror folded. The bag then exits through the window. Another richer experience. On this trip, a former co-worker friend, Wilhelm, joins as a co-driver. Just for fun, because they are still in the rehabilitation period after being involved in a motorcycle accident and therefore cannot be assigned as a second partner.

It was in the week of departure that Russia invaded Ukraine and David’s driving schedule was changed. En route between Ancona and Brindisi on Saturday, David was told that after being dropped off in Athens they would have to load up relief supplies for Poland and eventually Ukraine. That would have meant a much longer journey, but David was willing to do it. Wilhelm also decided to join him on this journey. They knew that it was headed for a war zone and that insurance would not pay in the event of an accident due to an act of war.

On his way through Greece with relief supplies, David drives incognito: a white car, a small sticker, that’s all. “A part of the population is not happy with the number of refugees in their country,” said David. “Giving help to these people has an interesting effect on many people’s eyes,” he explained. That’s why he prefers to stay under the radar here. As they head to Poland, delays due to the driving ban on Sunday and driving and rest times will significantly lengthen the journey. Something was found.

Within a day and a half, David’s contacts in the European Parliament arranged for exemptions from Sunday’s driving ban and exemptions from the driving time law for him and all transport companies driving relief goods destined for Ukraine. Also, there are no tolls to be paid in Germany and Poland for aid-related transportation to Ukraine. The Red Cross flag hangs in front of the lattice and the journey continues, through Bulgaria, Romania and Slovakia to Poland. 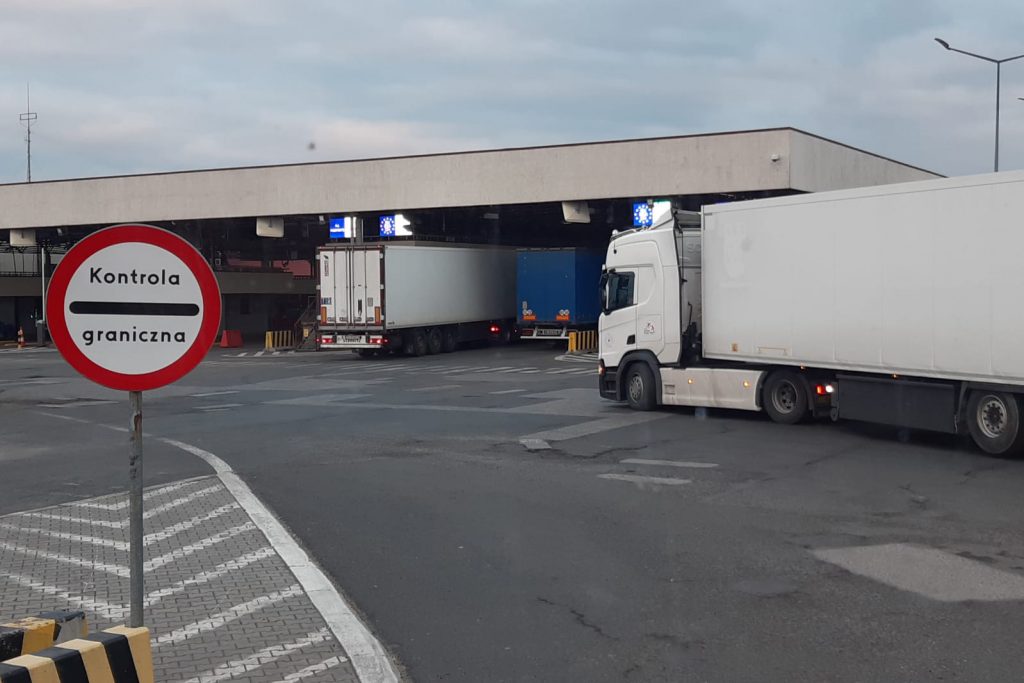 David crosses the border between Poland and Ukraine. 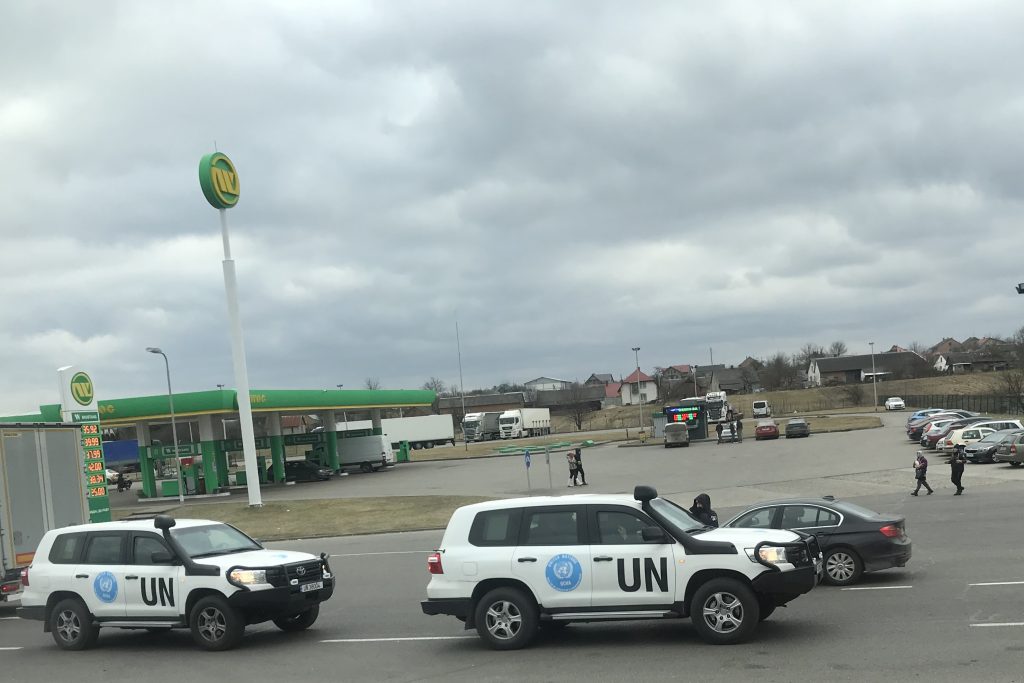 The UN is also active in the border areas.

In Poland, the foundation has rented a warehouse from a fruit trader in the city of Przeworsk. Due to events across the border, his trade was almost at a standstill, so most of it could be used by the foundation for the storage of relief supplies. Arriving here, David also met Bas den Ouden, who was carrying a cargo of potatoes, camp beds and medicine to the warehouse in a Jan Kees Boer truck. The following is a type of shuttle service, carrying relief supplies from Przeworsk to Lviv several times. They agreed to go to Ukraine together.

On the road from the border with Poland to Lviv in Ukraine, there are roadblocks in every small village. They could still make it through the first week of the war, but now that the violence of the war had spread, the blockade had also become a checkpoint. People were on high alert for Russian spies who might be able to get past the relief supplies storage locations. This type of trash can is a favorite target. By destroying it, Russia is trying to break Ukraine’s morale. The 200-kilometer commute from warehouses in Poland to Lviv now, at the end of March, takes no less than a day and a half due to delays at the border. 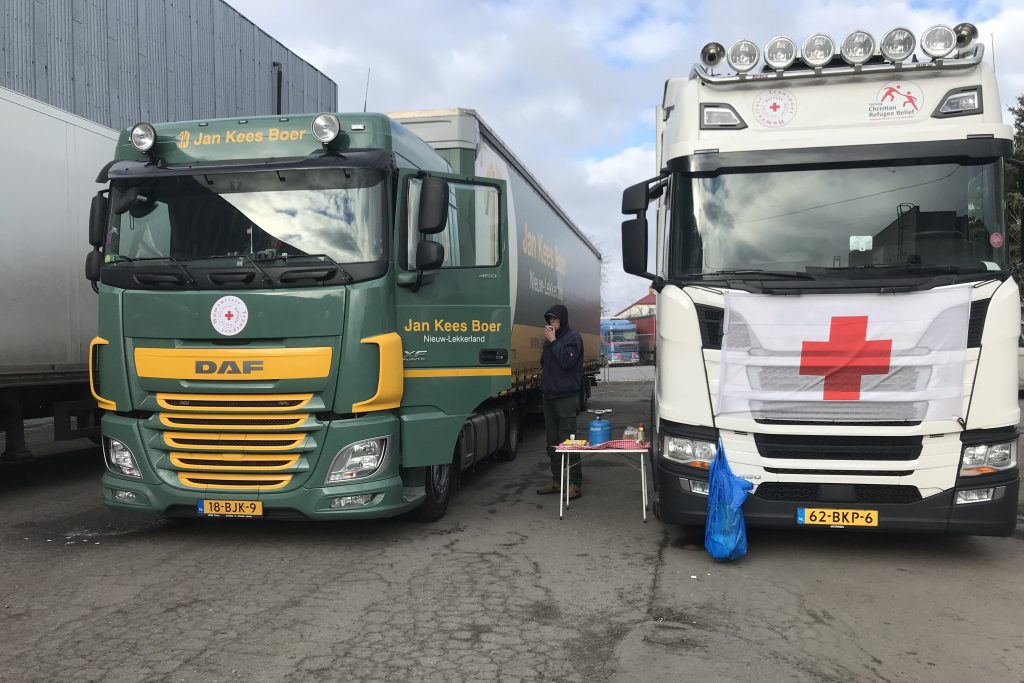 Bas den Ouden brings potatoes, camp beds and medicine in a Jan Kees Boer truck to a warehouse in Poland. After consultation, this cargo will go straight to Lviv. 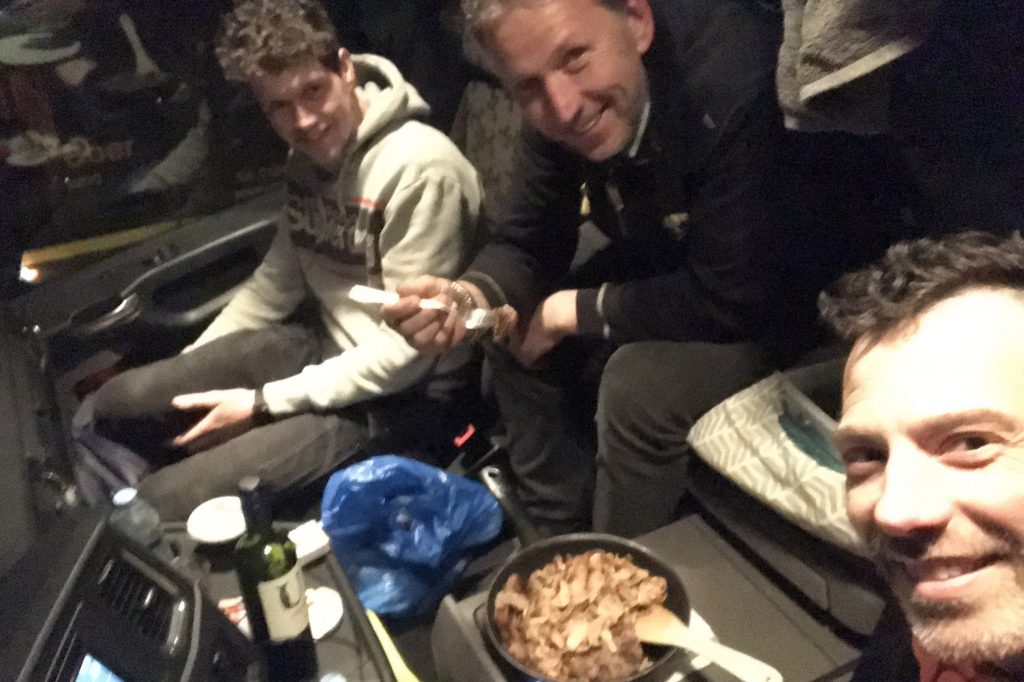 Together they drive, at night the pot quickly catches fire.

Just across the border, in Poland, a transit point has been set up in an old shopping mall. About 20,000 refugees wait here until they can continue their journey. A group of volunteers from Genemuiden are at this location with chip carts, campers, and refrigerated trucks full of food. They had 7,000 kilograms of steak, four pallets of French fries and six hundred liters of pea soup to distribute to the refugees. Fries with steak are very popular. So much so that the group made news in several countries with this action. The CRR Foundation also made a healthy contribution to the Genemuiden group by asking David to send ten pallets of mandarins. The mandarins came through a warehouse owner in Poland, a fruit merchant.

After several shuttle rides finally home, and then on to Ukraine again. This time not with relief supplies, but with a fully equipped field hospital. He returned by plane, driving east again after a week of rest with his wife and kids, again with a fully equipped field hospital. In the end, we can now say that David, even though he has only had a driver’s license for five months, is an expert by experience having traveled 7,500 kilometers through eleven countries. 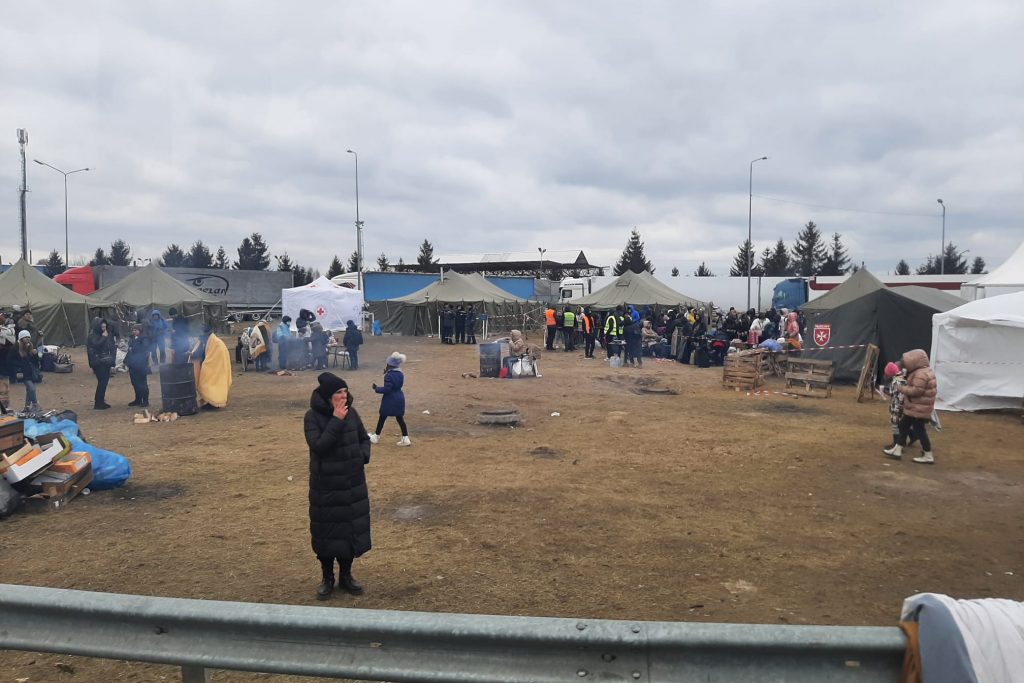 At the border with Poland, the refugees waited in the freezing cold until they were allowed to continue. 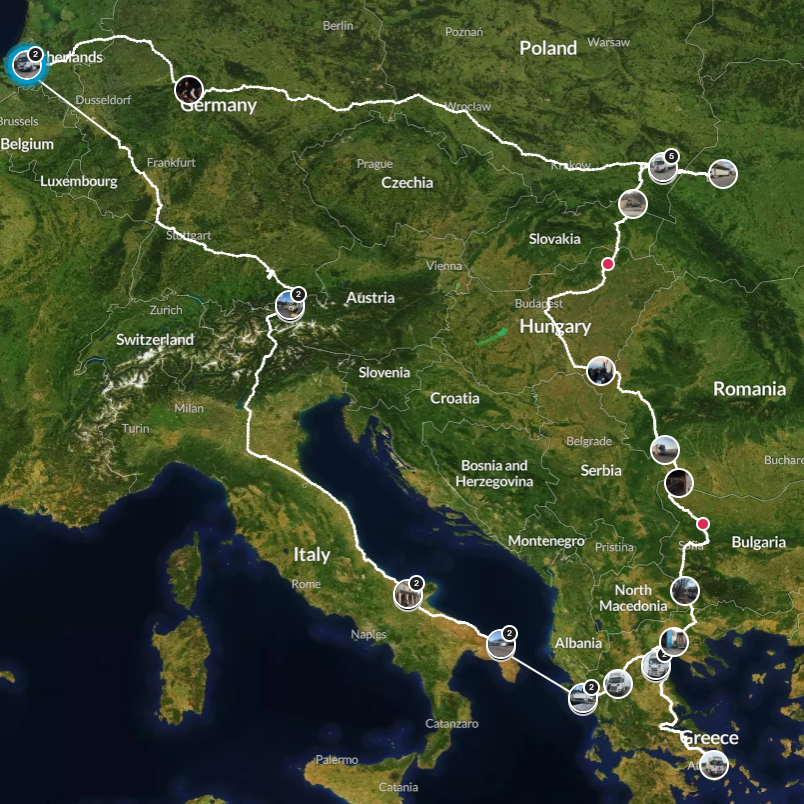